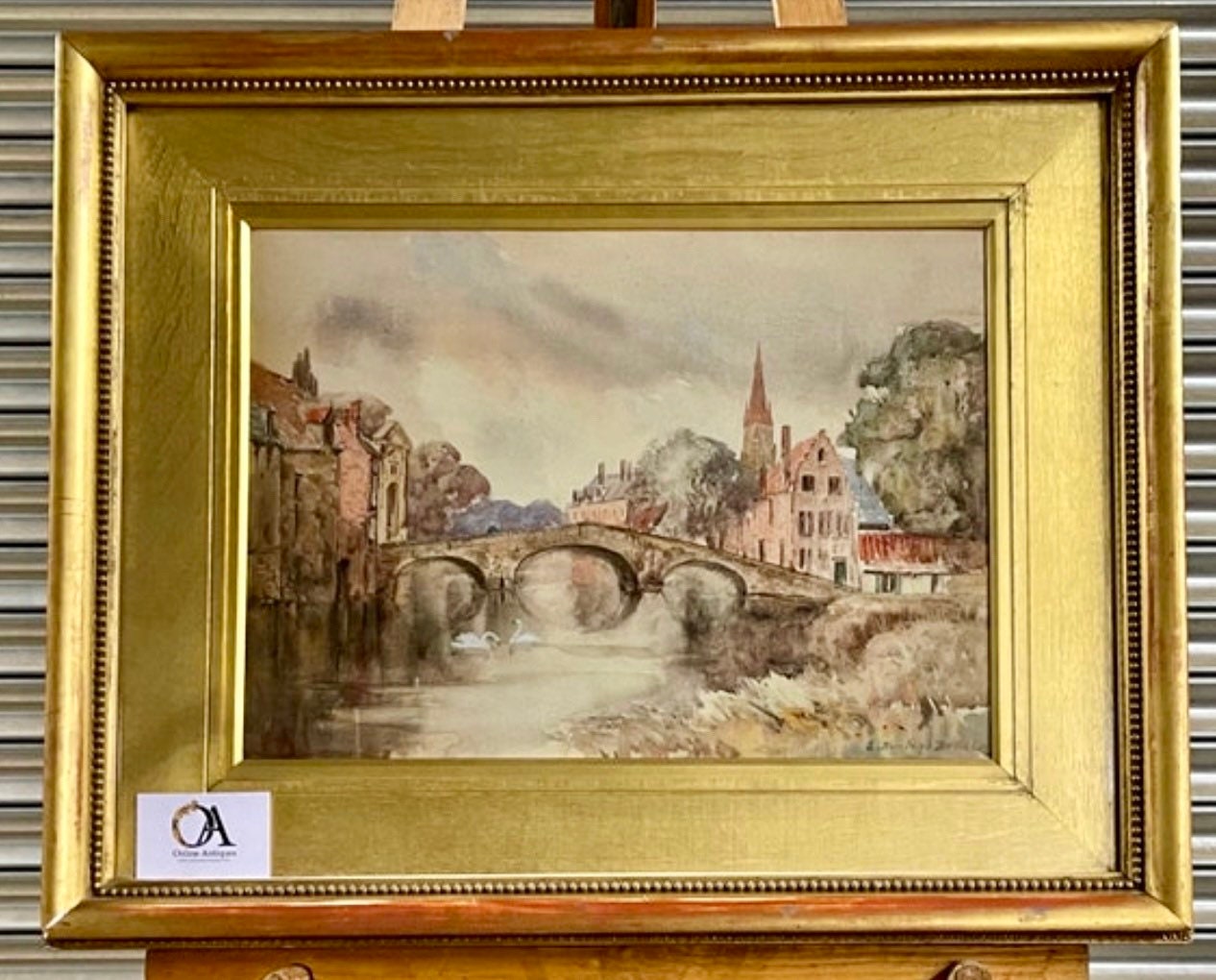 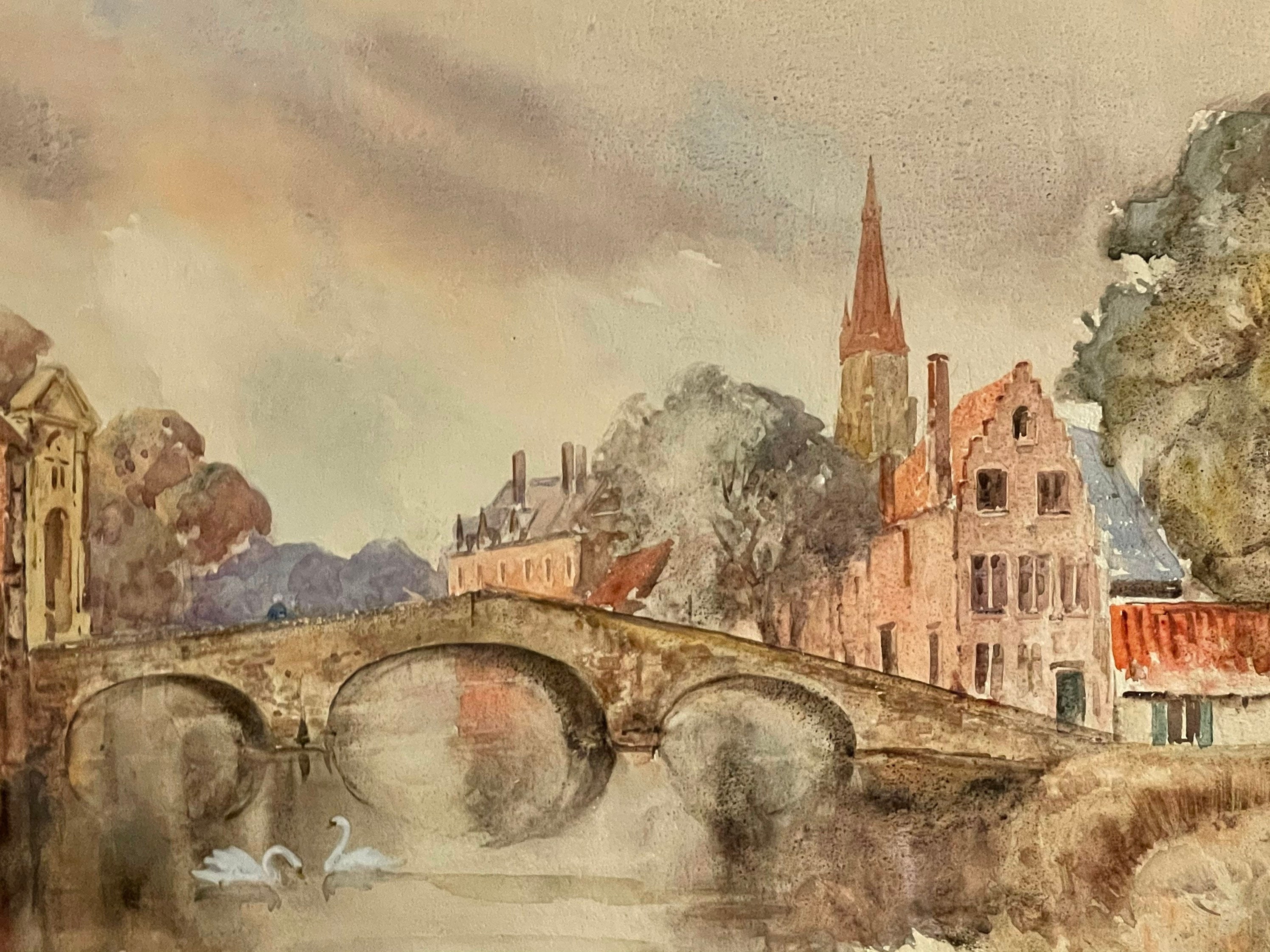 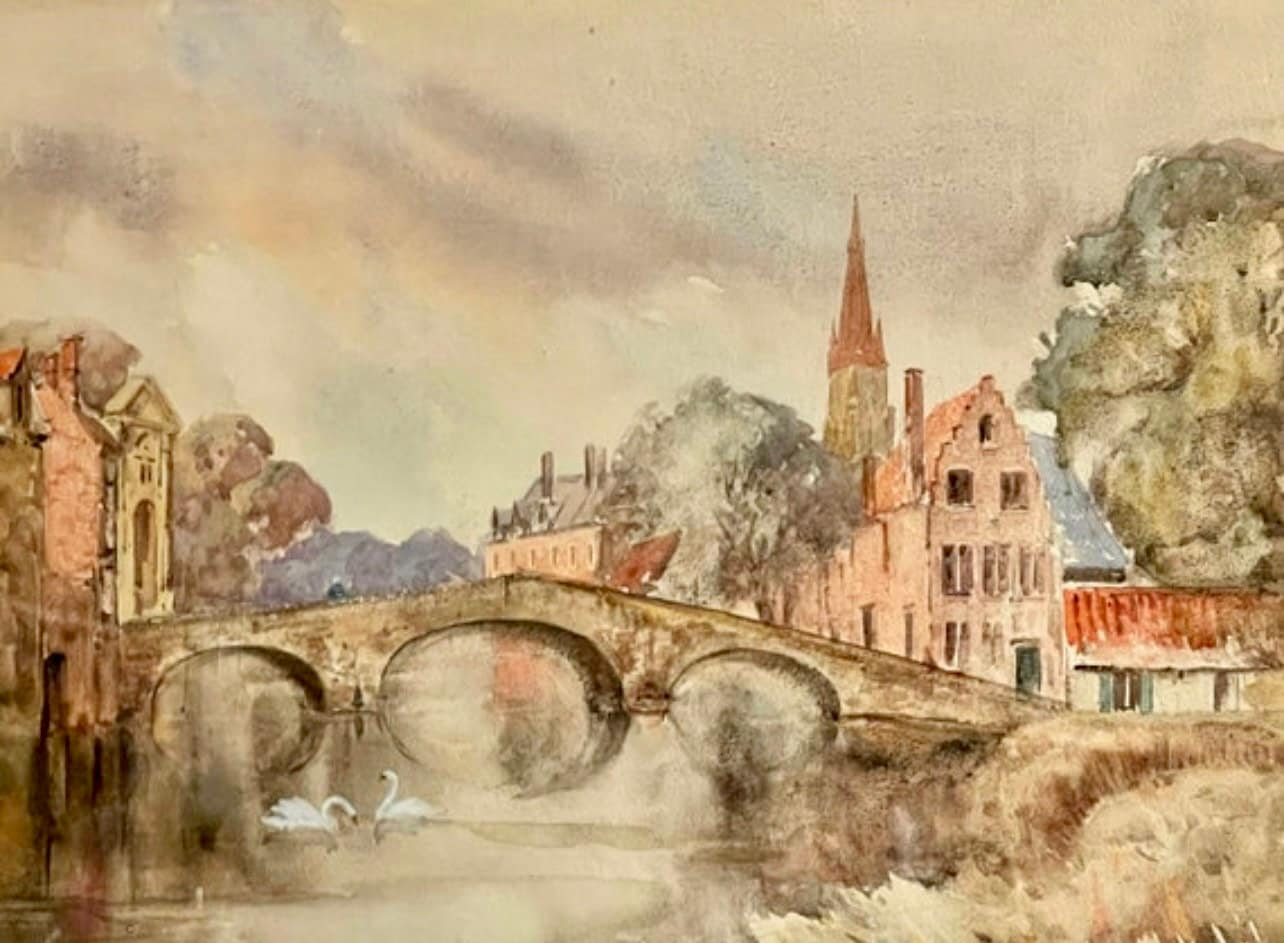 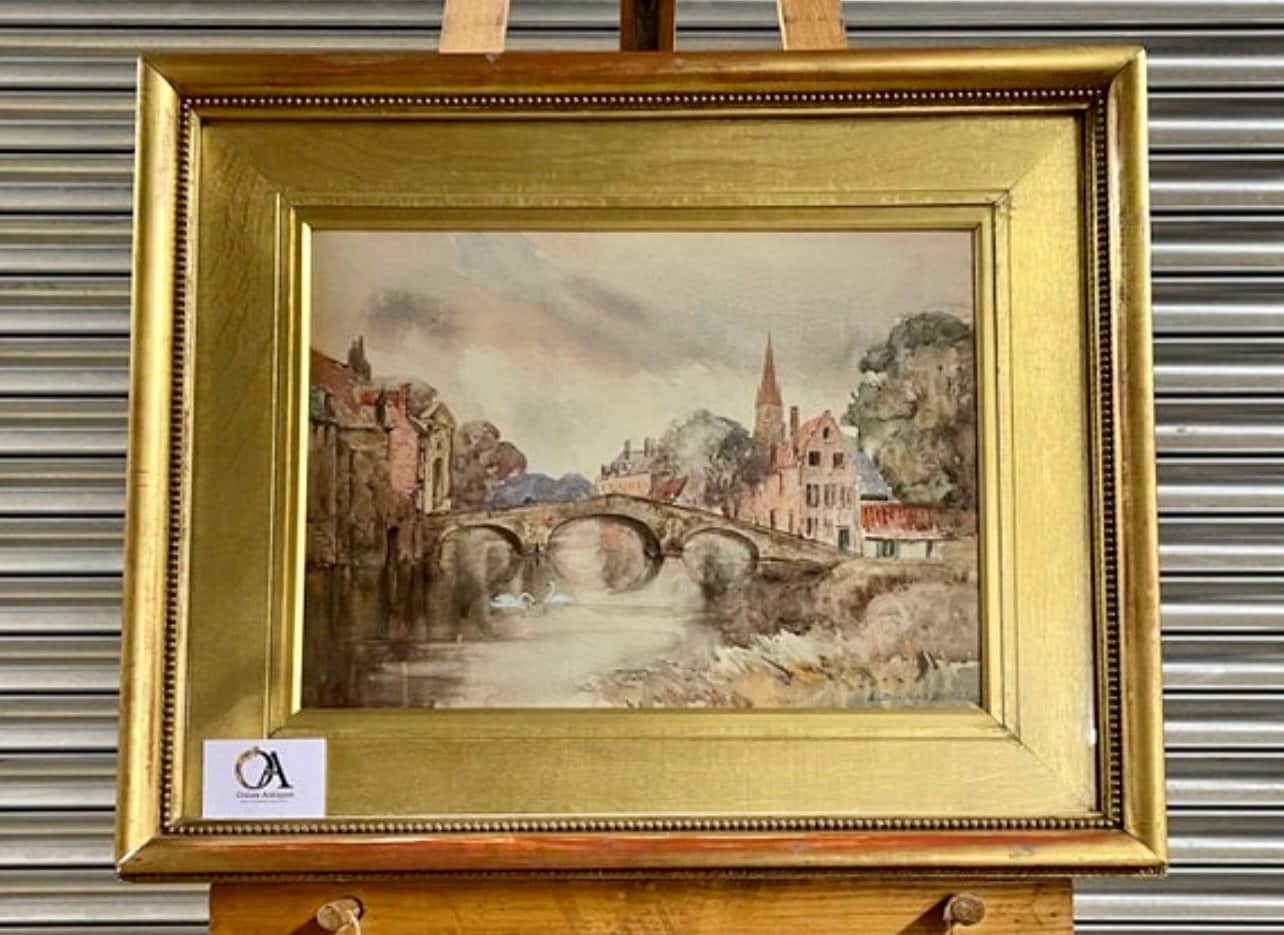 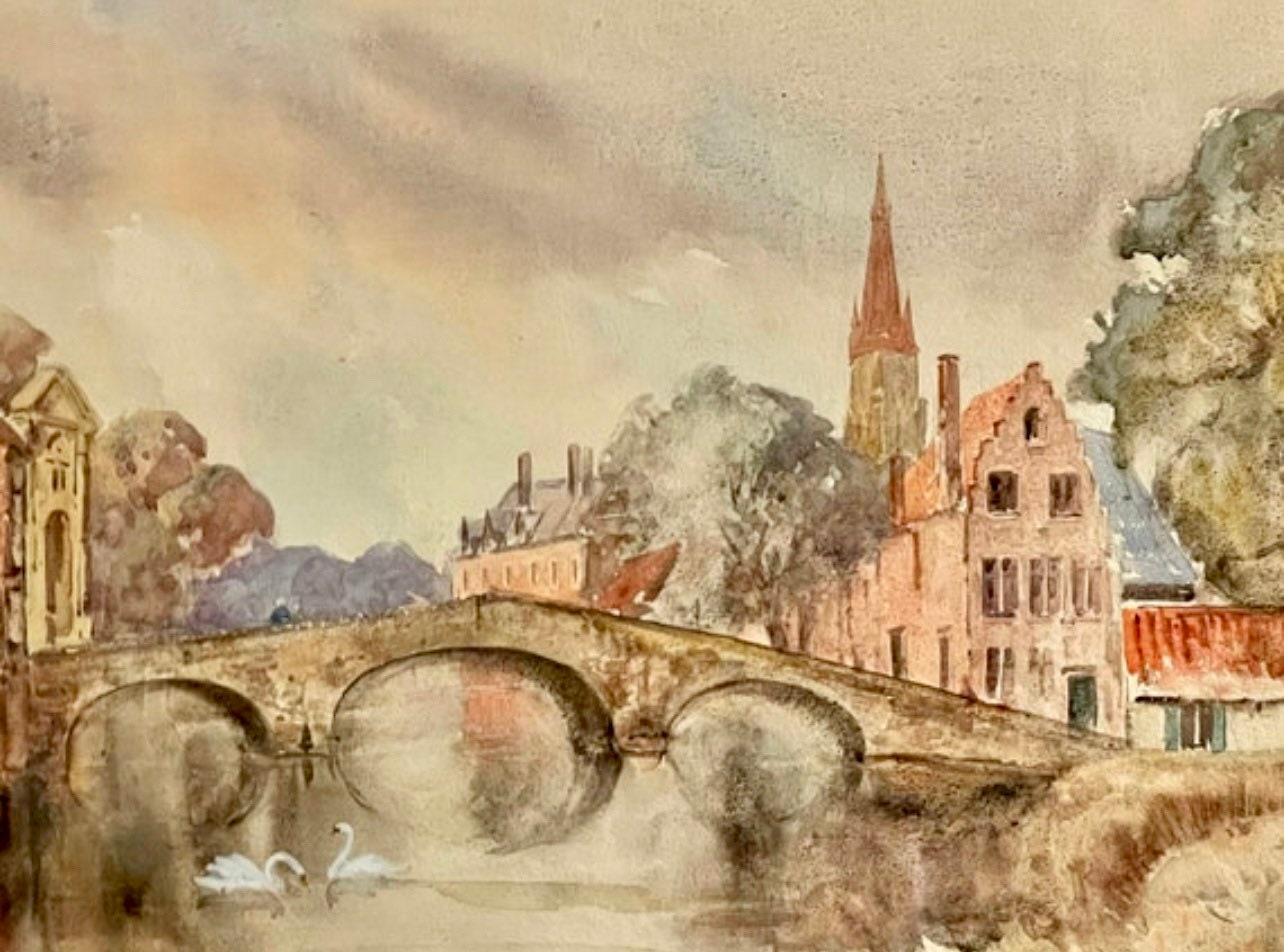 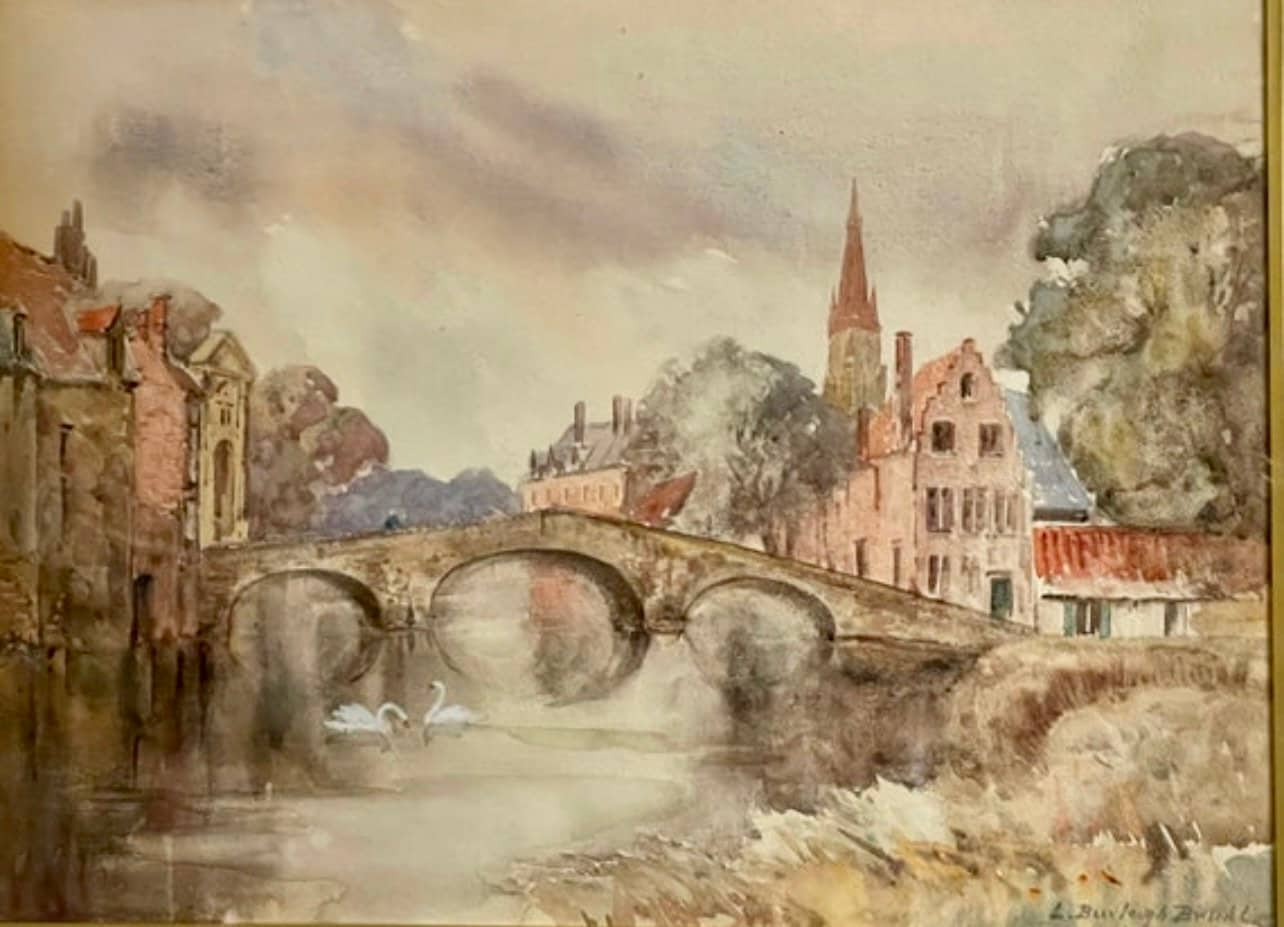 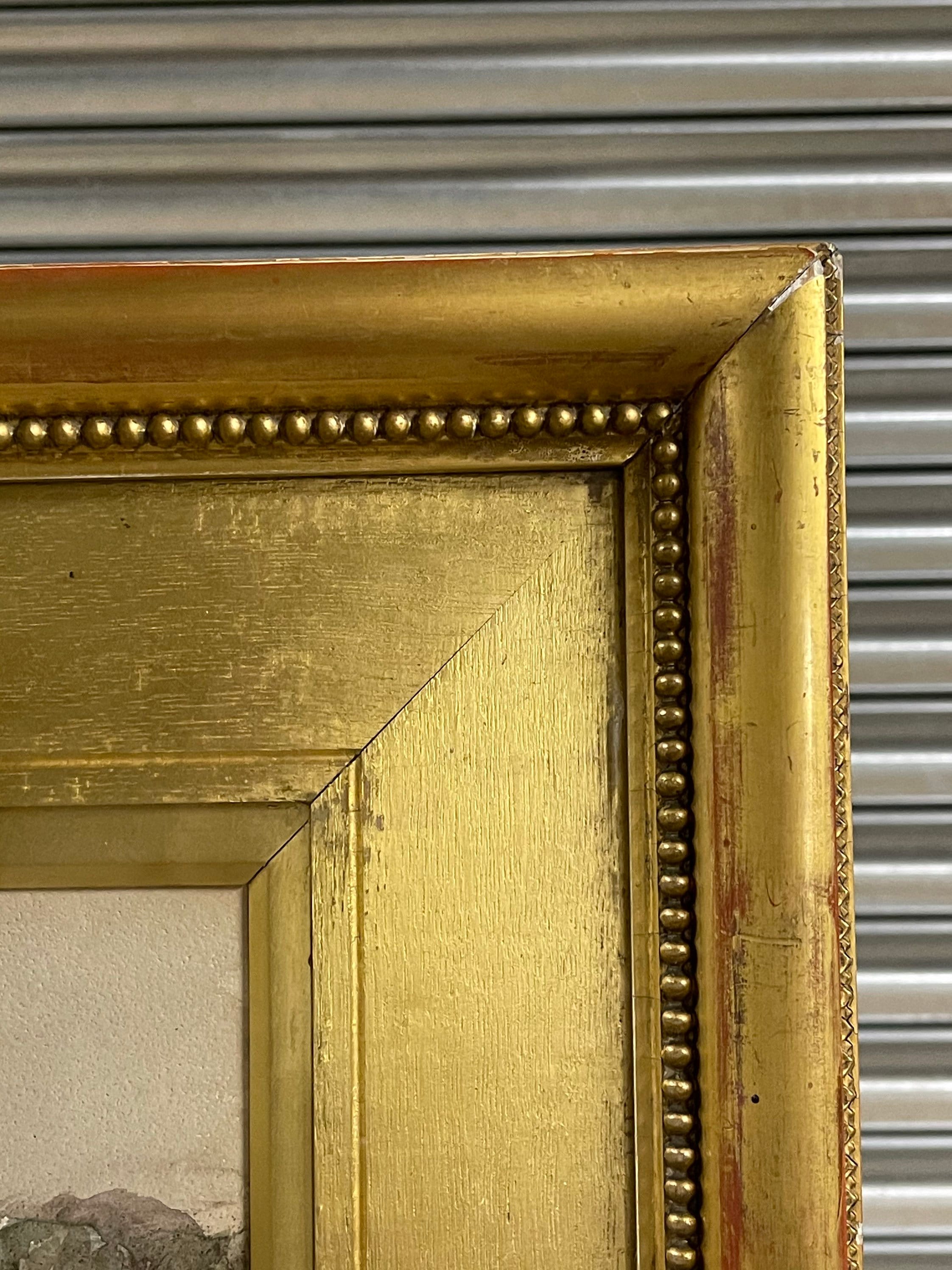 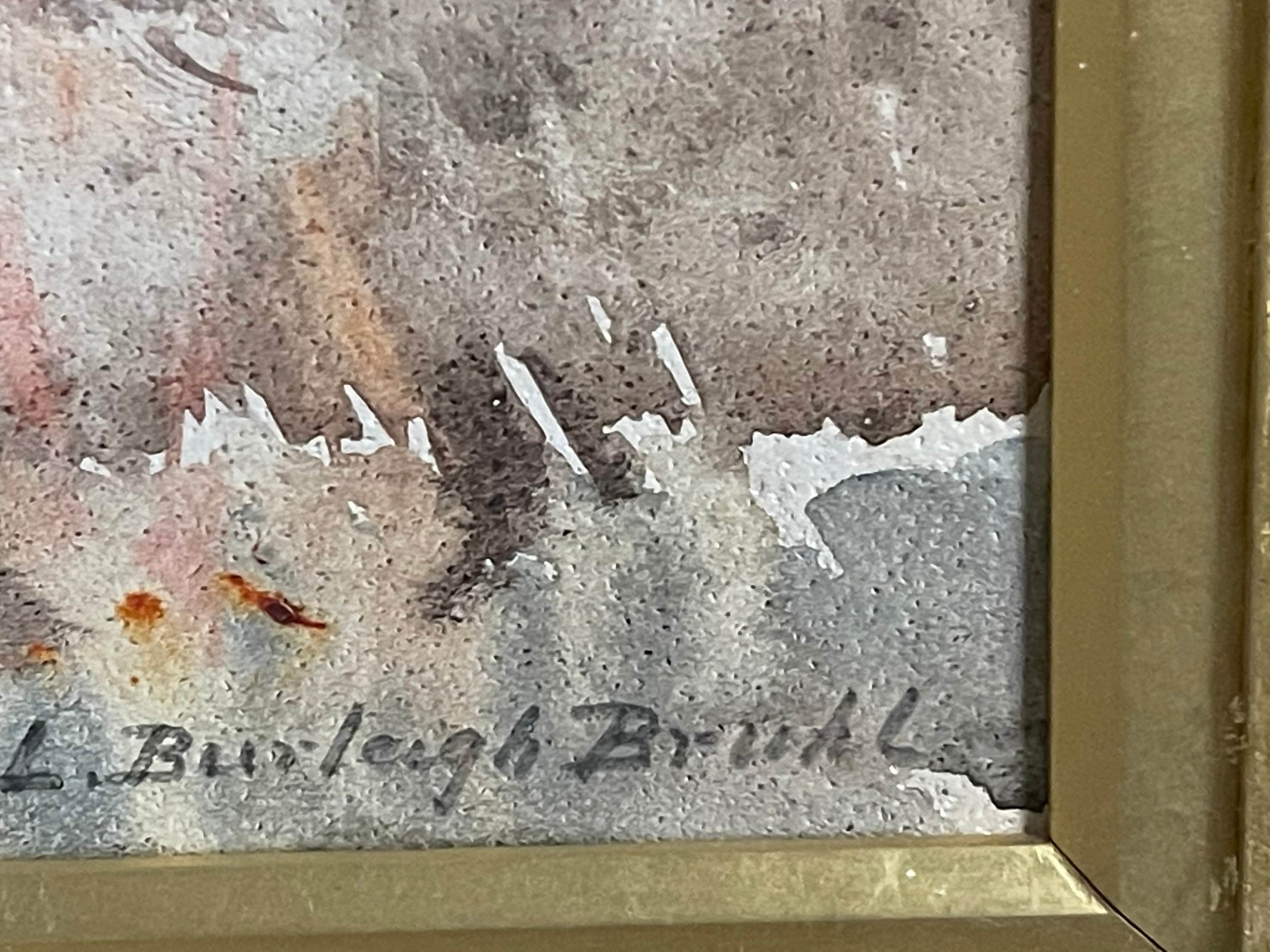 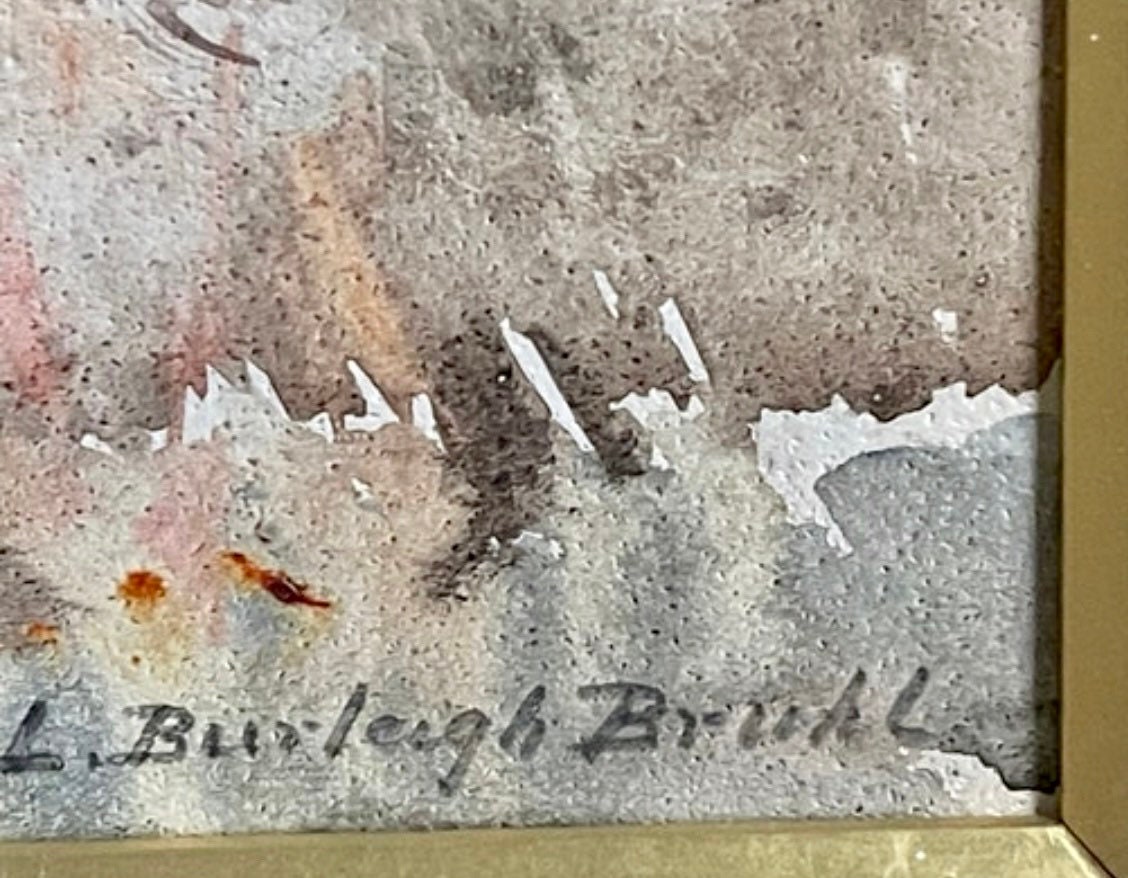 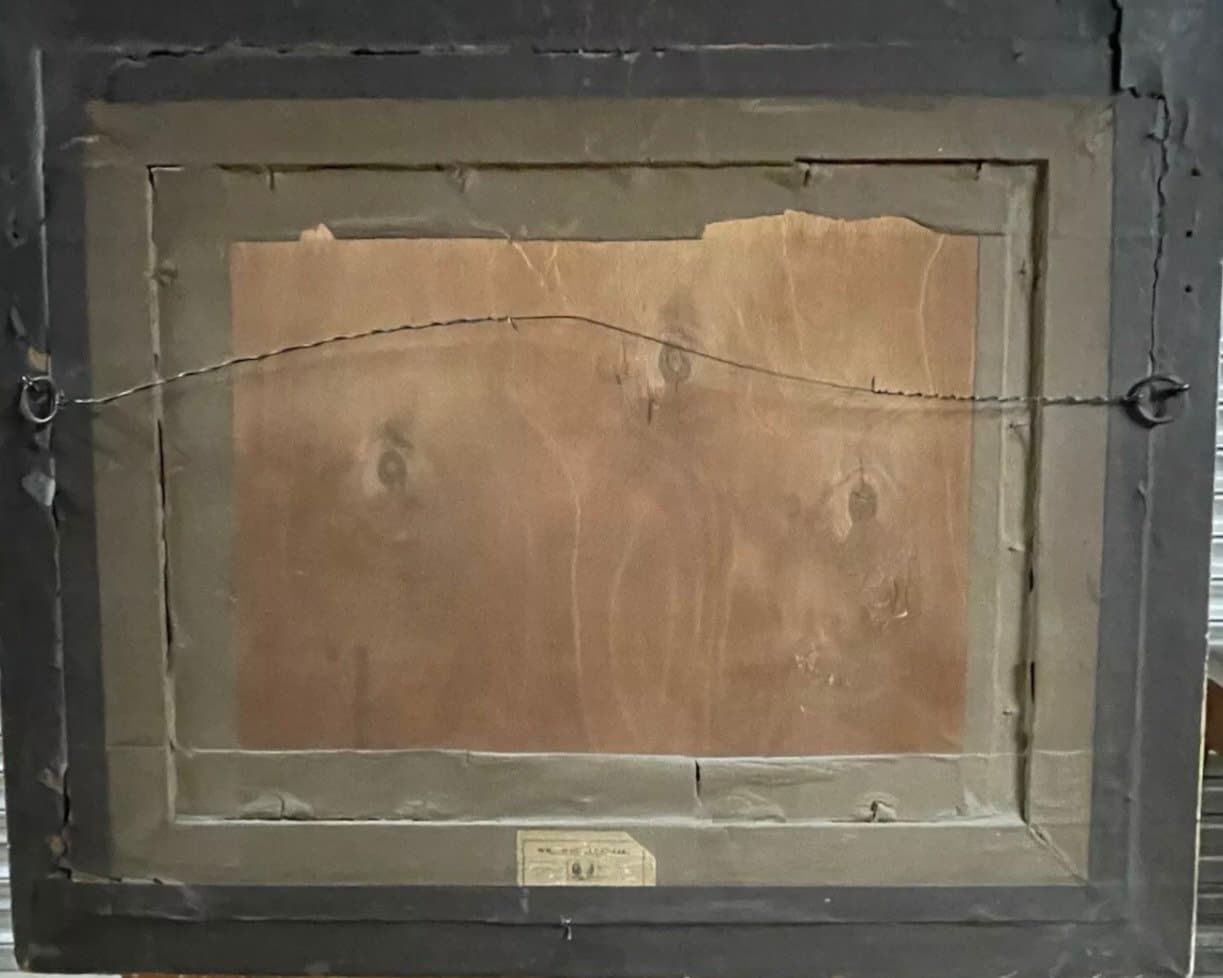 Signed by the artist lower right


Louis Burleigh Bruhl, was born in Baghdad, which is now in Iraq on 20 July 1861, sometimes noted as Lewis Burleigh Bruhl. Educated in Vienna and in England, where he studied medicine at the London Hospital. He married at Hampstead, London in 1889 Alice née Edgar, and in 1891 was living at 5 Cranworth Villas, Dymoke Road, Hornchurch with his 30 year old wife Alice, who was born at Hereford, and their 2 month old son John Burleigh. In 1911, living at 2 Carlton Road, Romford, Essex with a second son, 14 year old William Wilfred, and they moved to Watford about 1916. A prolific oil and water-colour artist, often producing small detailed pictures and became president of the Watercolour Society and was a contemporary of Alfred Bennett Bamford, with whom he often exhibited. A landscape painter and poster artist and was responsible for ‘Cornish Riviera’ the famous G.W.R. railway poster, along with other images depicting the delights of Falmouth and Glorious Devon. A selection of his Essex scenes were published in ‘Essex Water-Colours’ (1915) and his paintings can be found in ‘Essex’ by Ascott Robert Hope Moncrieff (1846-1927). A member of the Ipswich Art Club 1932-1934, but had exhibited from The Elms, 105 Mildred Avenue, Watford in 1923, a watercolour ‘The Castle, Ludlow’ and in 1932 six watercolours ‘Porte Marechale Bruges’, ‘When Bluebell Bloom neath Beech and Birch’, ‘In the Bourne Valley, nr. Bournemouth’, ‘A Bit on the Bure, Yarmouth’, ‘On the Grand Union Canal, Watford’ and ‘Yareside, Gorleston’,,four in 1933 ‘Our River-The Orwell at Trimley’, ‘Corfe Castle’, ‘A Suffolk Haven-Gorleston-on-sea’ and ‘Penrhyn Creek, Falmouth’, in 1934 ‘The Time is Waning-The Year is Old’, ‘Low Tide, Mounts Bay’ and ‘Dear Dorset, Warborough Bay’. His wife Alice died at Watford in 1936, aged 75 and in 1939, Lewis Burleigh-Bruhl was a landscape painter living at 105 Mildred Avenue, Watford, Hertfordshire with a married paid housekeeper, Carmen Peyton-Bruhl (born 29 December 1896) and he married at Marylebone, London in 1940, Ada Maud May. Still of 105 Mildred Avenue, Watford when he died at Peace Memorial Hospital, Watford on 29 January 1942, aged 80, leaving his effects to his wife Ada Maud Bruhl.