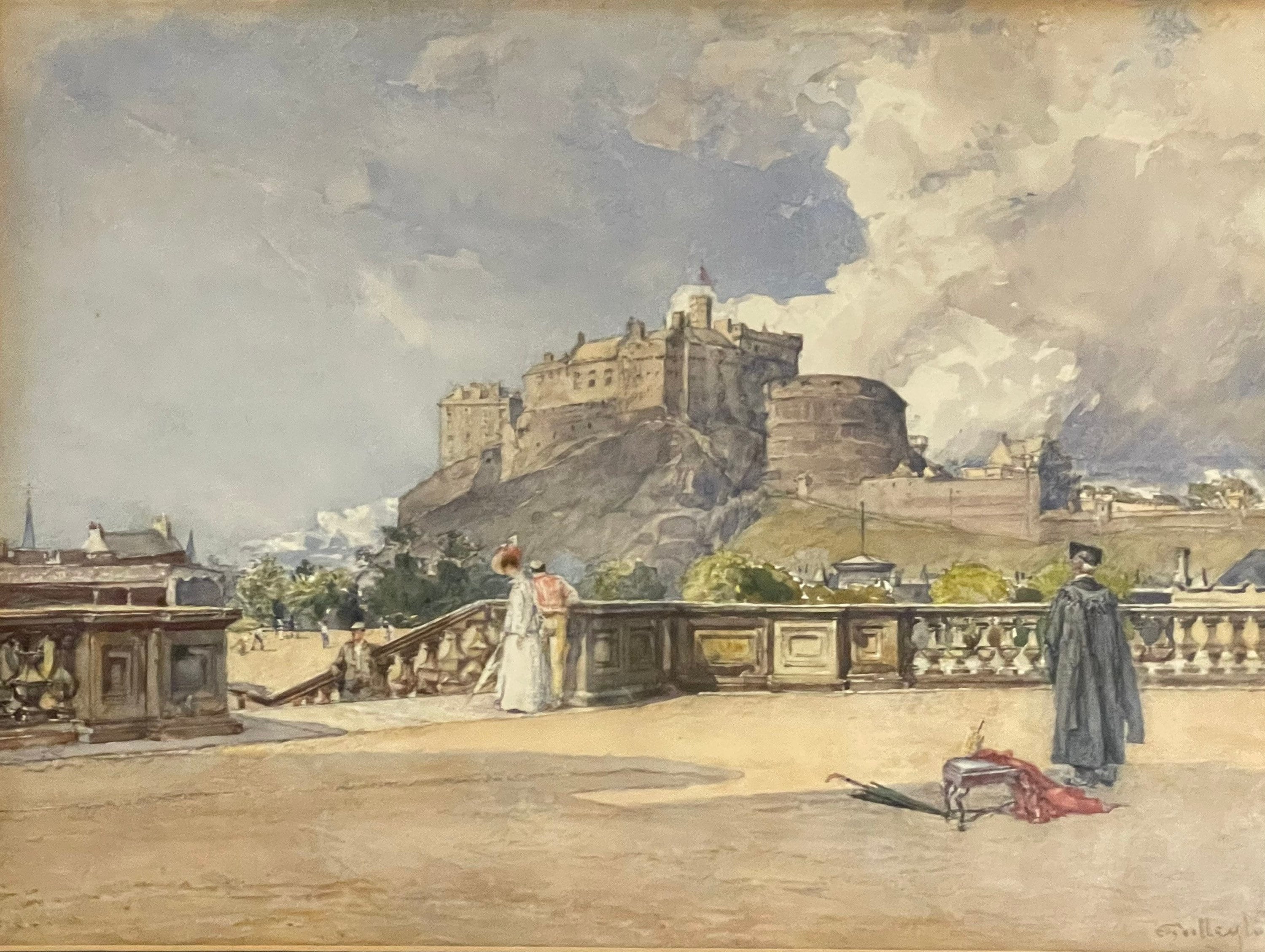 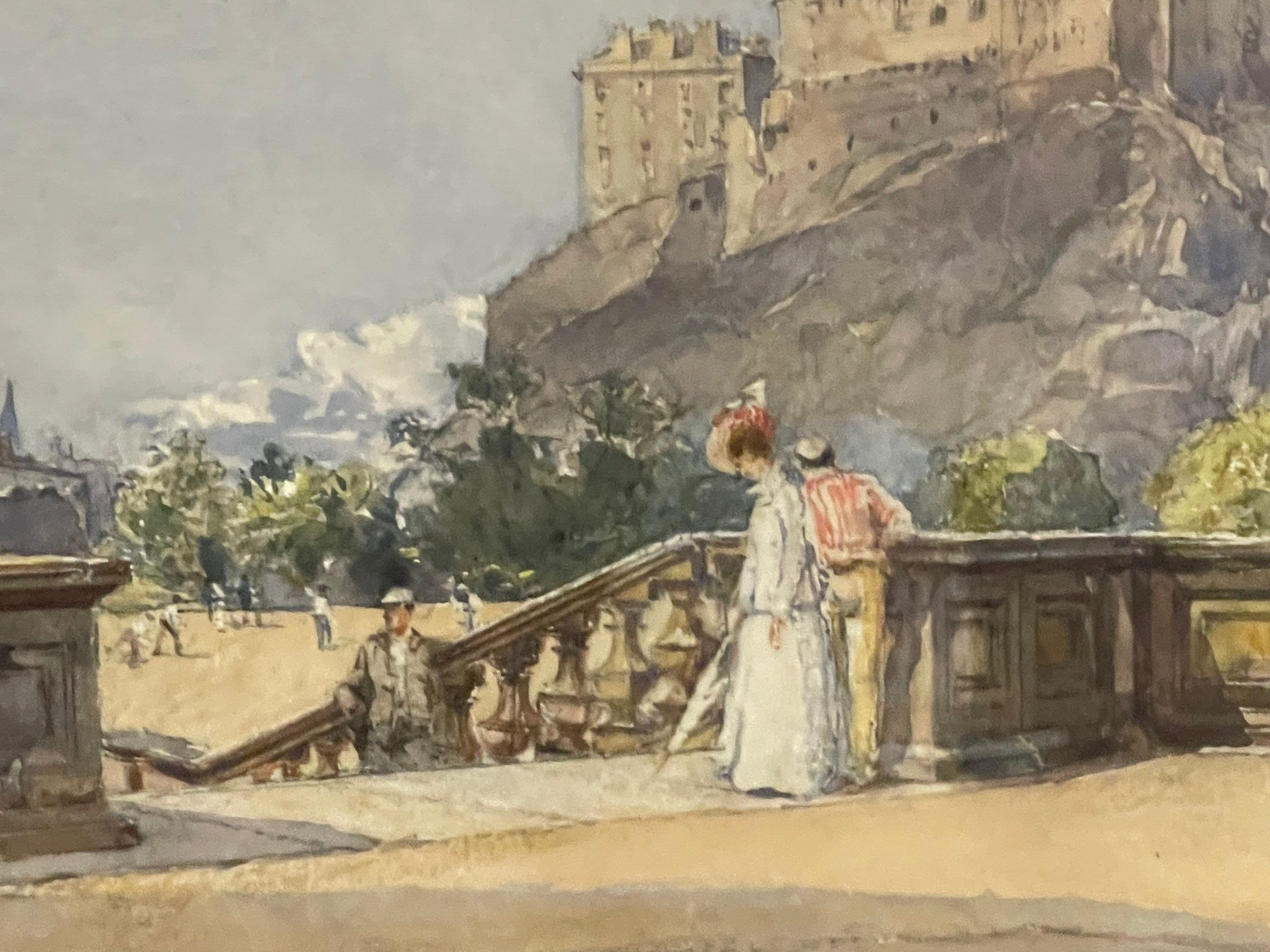 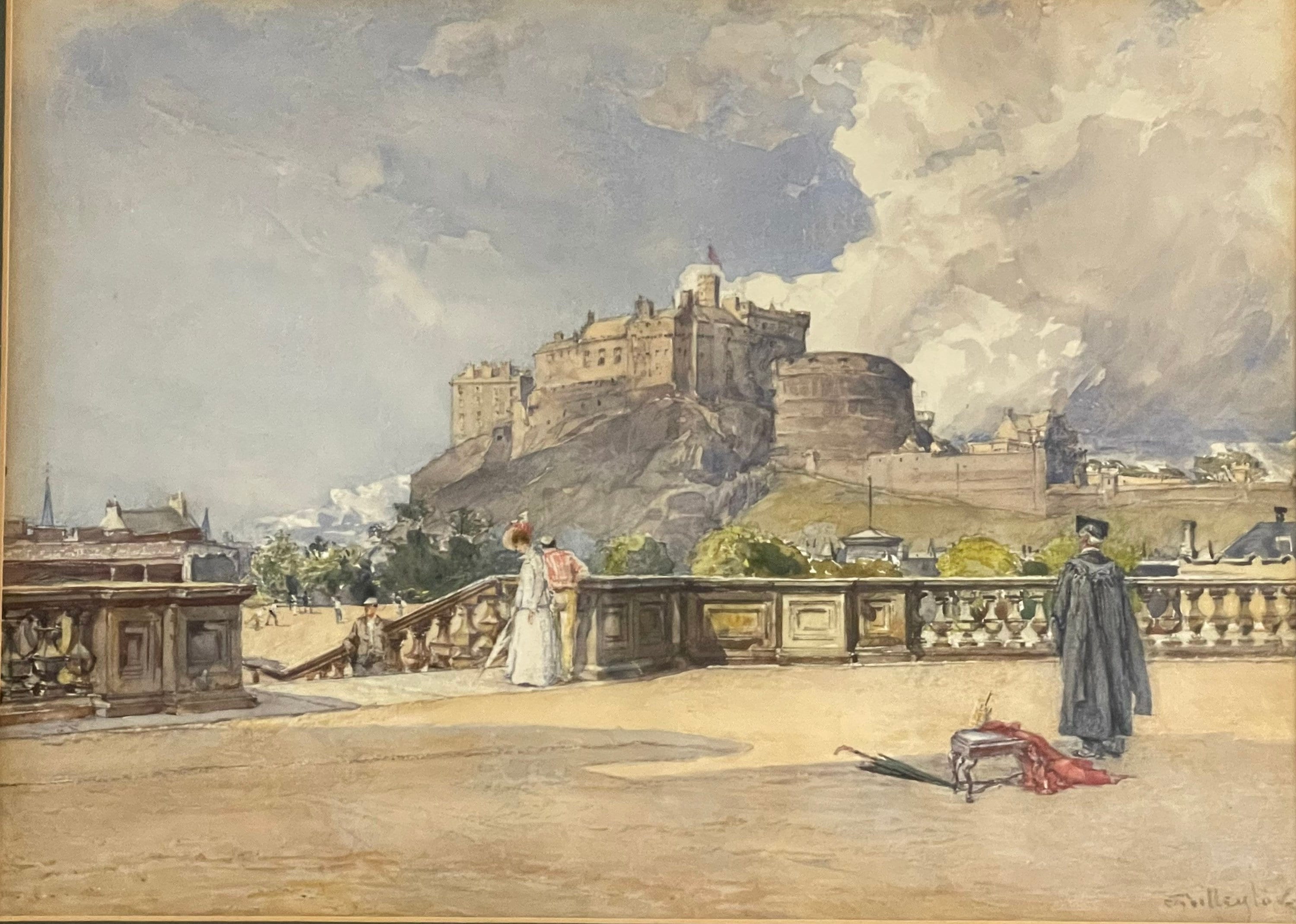 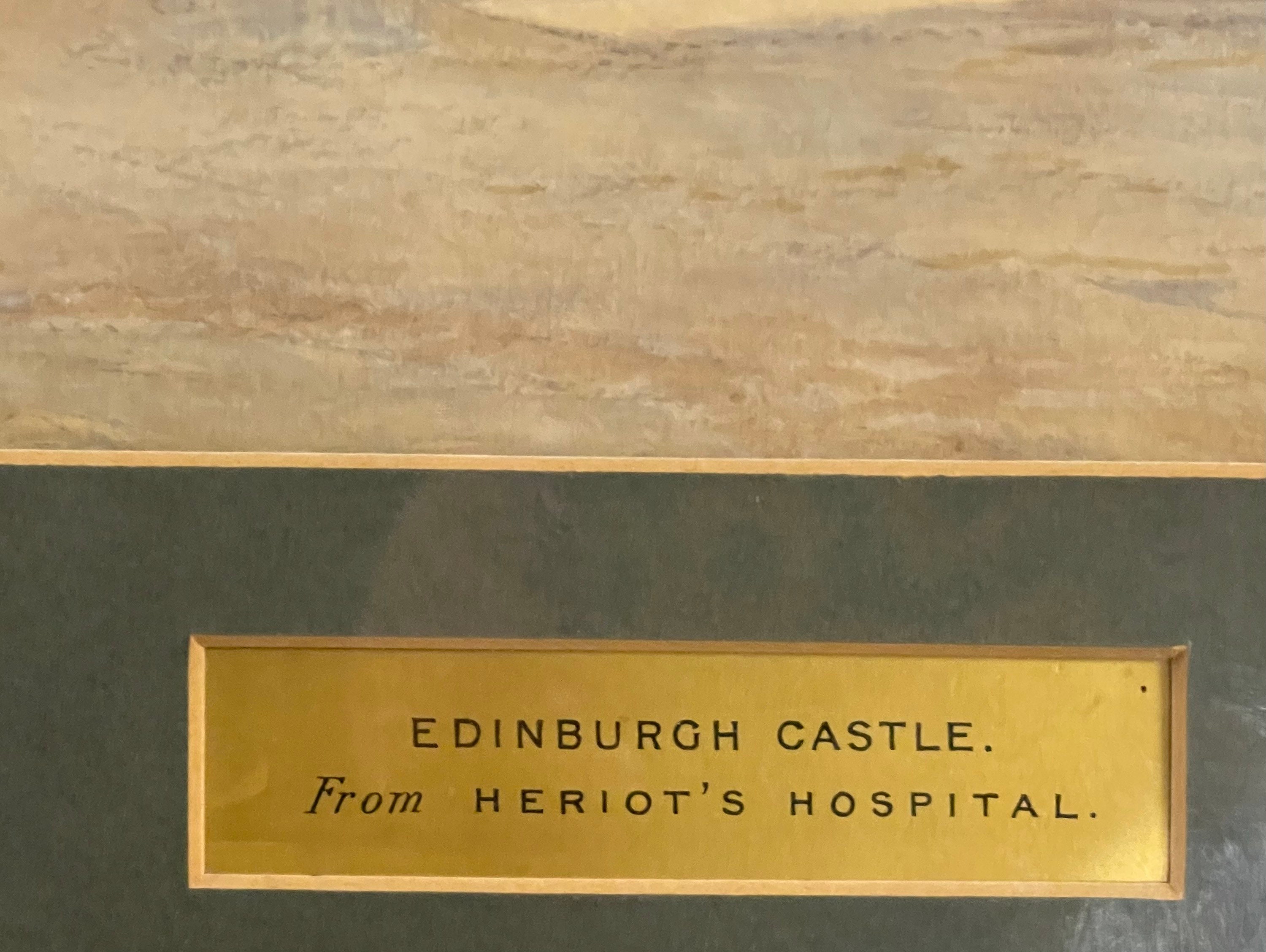 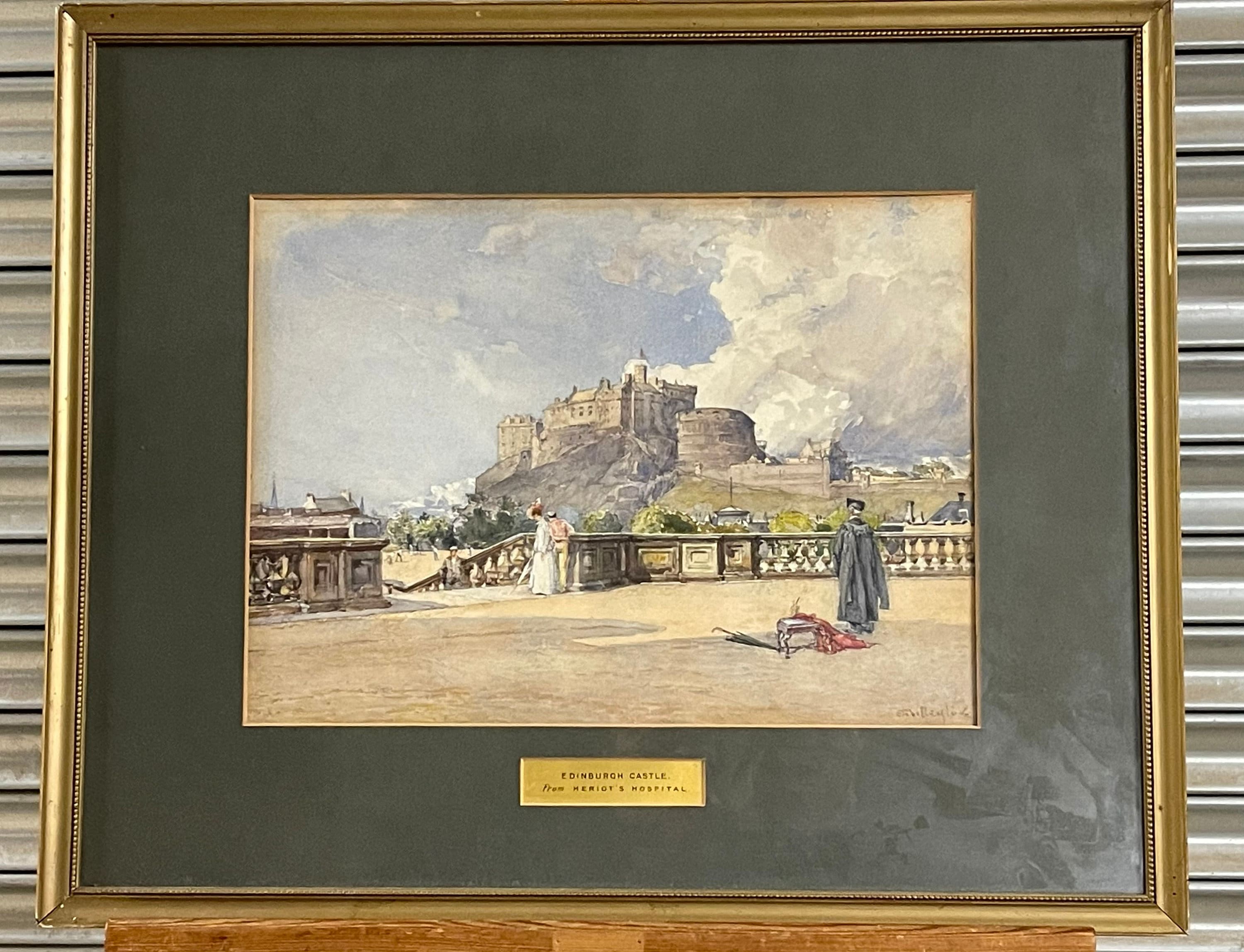 Stunning Original Watercolour of Edinburgh Castle which is a view from Heriots Hospital by John Fulleylove.


Working mainly in watercolour, John Fulleylove was a painter and illustrator who specialised in landscapes, and particularly gardens, as settings for impressive architecture, from Hampton Court to Athens.


John Fulleylove was born in Leicester on 18 August 1844, the youngest of five children of the coach builder, John Fulleylove, and his wife, Elizabeth (née Preston), of Yeoman Street. His eldest brother, Thomas, was a coach painter. The family grew up at addresses in the Parish of St Margaret, including 7 Cobden Street, which would remain in its possession.


Educated under the Rev John Highton at Mill Hill School (the forerunner of Leicester Grammar School), Fulleylove was articled at the age of 16 to the local firm of architects, Flint and Shenton. In his free hours, he began to develop a strong interest in Picturesque architecture by sketching from nature, and he gradually focused on painting. He received some instruction from Harry Ward, a drawing master of the school of James Duffield Harding. His earliest drawings were views of his native town and its neighbourhood, and his first exhibits, at the Society of British Artists in London from 1871, were of English subjects influenced by his friend, Thomas Collier. In 1875, he made the first of many trips abroad, visiting Italy.


On 18 June 1878, Fulleylove married the artist, Elizabeth Elgood, the daughter of a wool merchant, and a sister of the artists, George and Thomas Elgood. Though George studied under Wilmot Pilsbury at Leicester School of Art, he received some tuition from Fulleylove, and sketched with him, Pilsbury and his brother, Thomas, in the Leicestershire countryside.


Following his marriage, Fulleylove and his wife would continue to live with his parents, at 24 Regent Street, Leicester, but would make regular summer sketching tours that included visits to Tabley Old Hall, Cheshire (1878), Hampton Court (1879) and Versailles (1882). Exhibiting frequently in London, he was elected an associate member of the Royal Institute of Painters in Water Colours in 1879, and a full member a year later, and a member of the Royal Institute of Painters in Oils in 1883. (He acted as Vice-President of the ROI in 1906.)


In 1883, Fulleylove and his wife settled at 32 Mecklenburgh Square, in London, and became part of a circle of leading artists that included Sir James Linton, Charles Green, James Orrock, and Lewis Day. Together they had two daughters and a son, including Joan, who became a noted stained glass designer, and John Christopher, who became an architect, illustrator and draughtsman.


Fulleylove secured his reputation with eight solo shows held at the Fine Art Society between 1886 and 1906, and especially with the exhibition in 1896 of 90 drawings that had been made on his travels through Greece with his friends, Alfred Higgins and Somers Clarke. He was able to capitalise on this success through his increasing work as a landscape illustrator, and especially for books published by A & C Black, which ranged from John Kelman’s The Holy Land (1902) to Arthur Poyser’s The Tower of London (1908). He also raised his international profile, and received a bronze medal at the Exposition Universelle in Paris in 1889 and an honourable mention at the Exposition Universelle in 1900.


From 1894, Fulleylove lived at 21 Church Row, Hampstead, and, in the 1900s, kept a studio at 1 Langham Chambers, Portland Place. During the year 1907-8, he served as President of the Oxford Art Society. He died in Hampstead at the age of only fifty, on 22 May 1908, while he was working on a commission from A & C Black for a book on Eton.


His work is represented in numerous public collections, including the British Museum and the V&A the New Walk Museum & Art Gallery (Leicester); and the Yale Center for British Art (New Haven, CT).