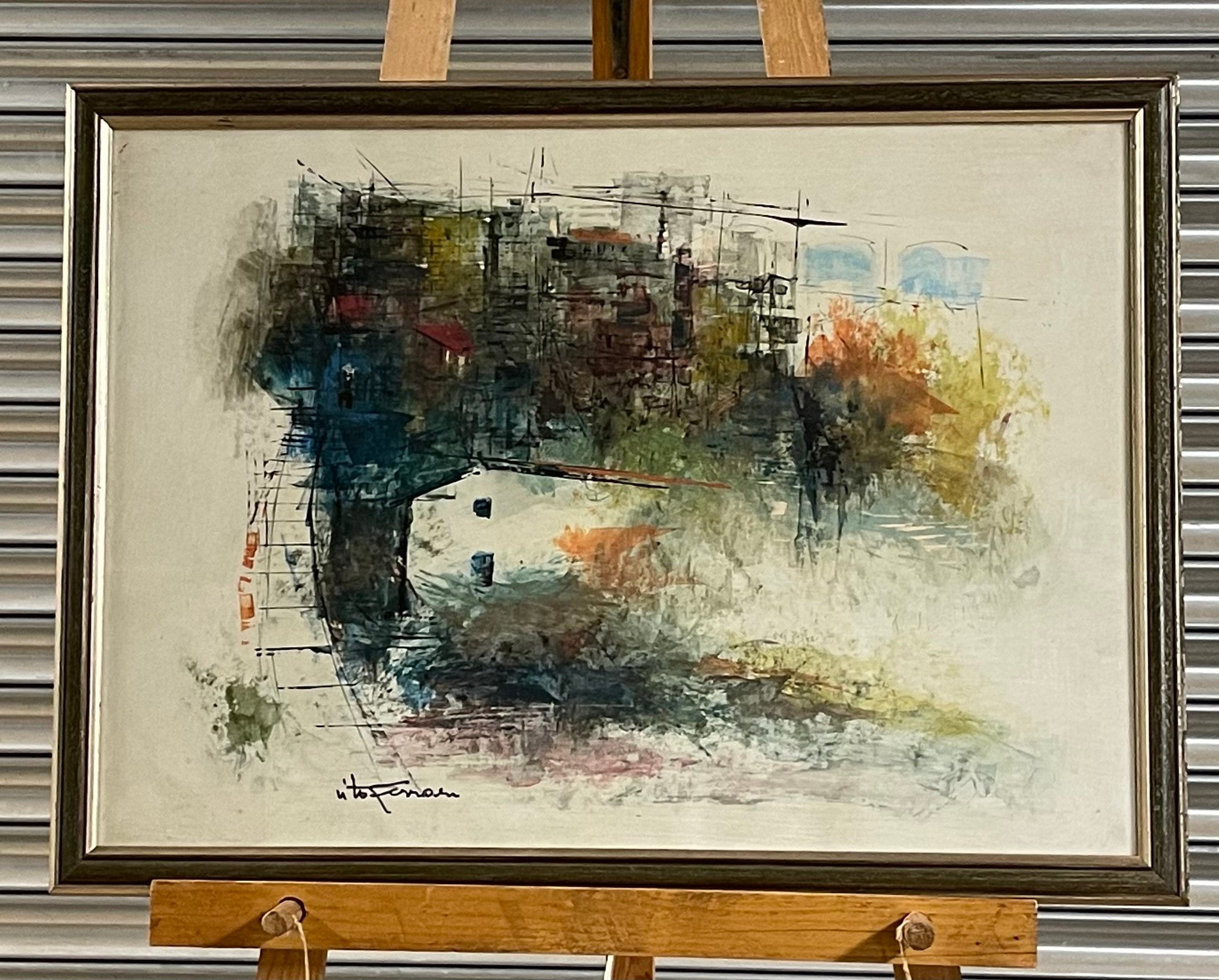 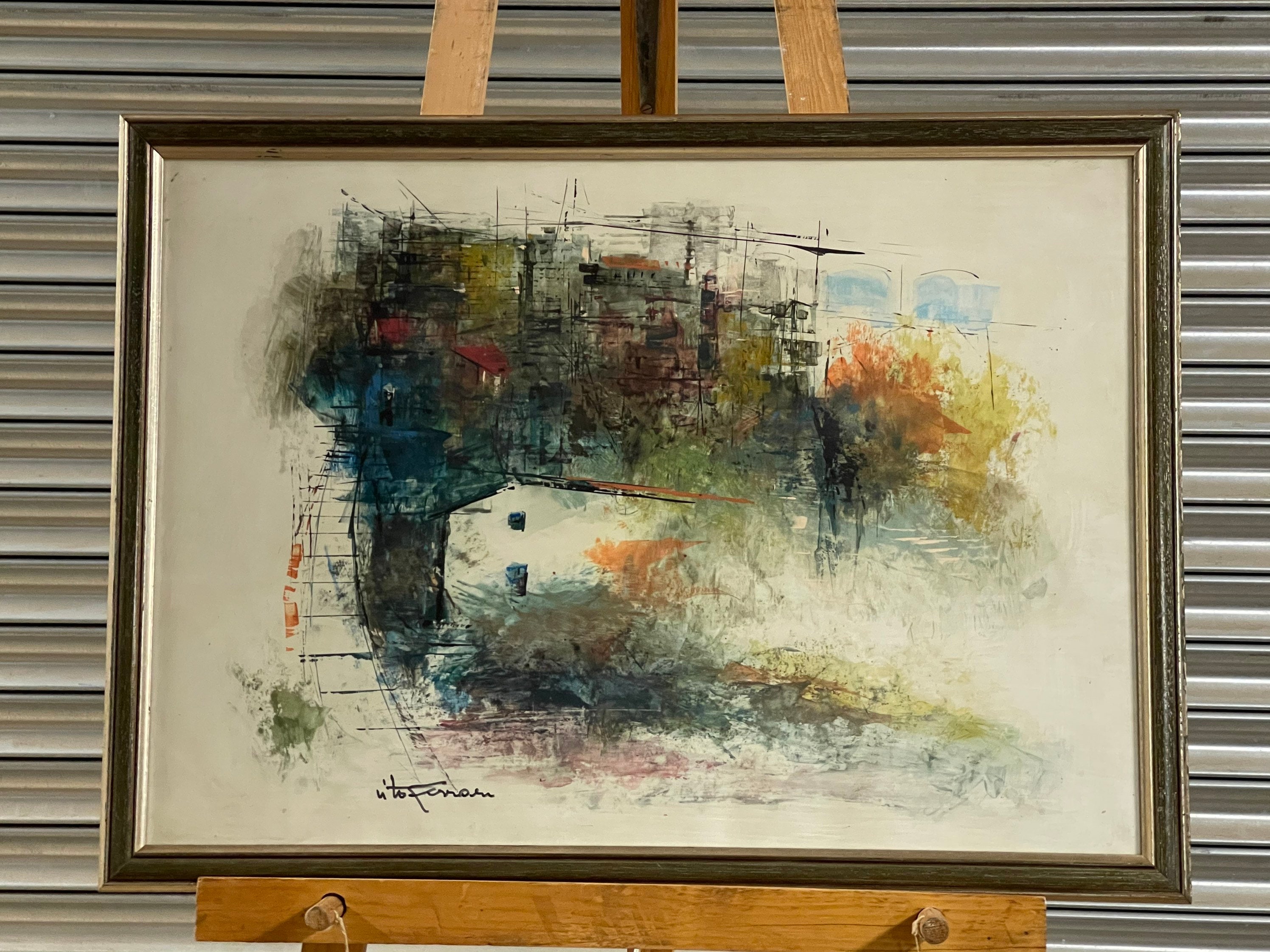 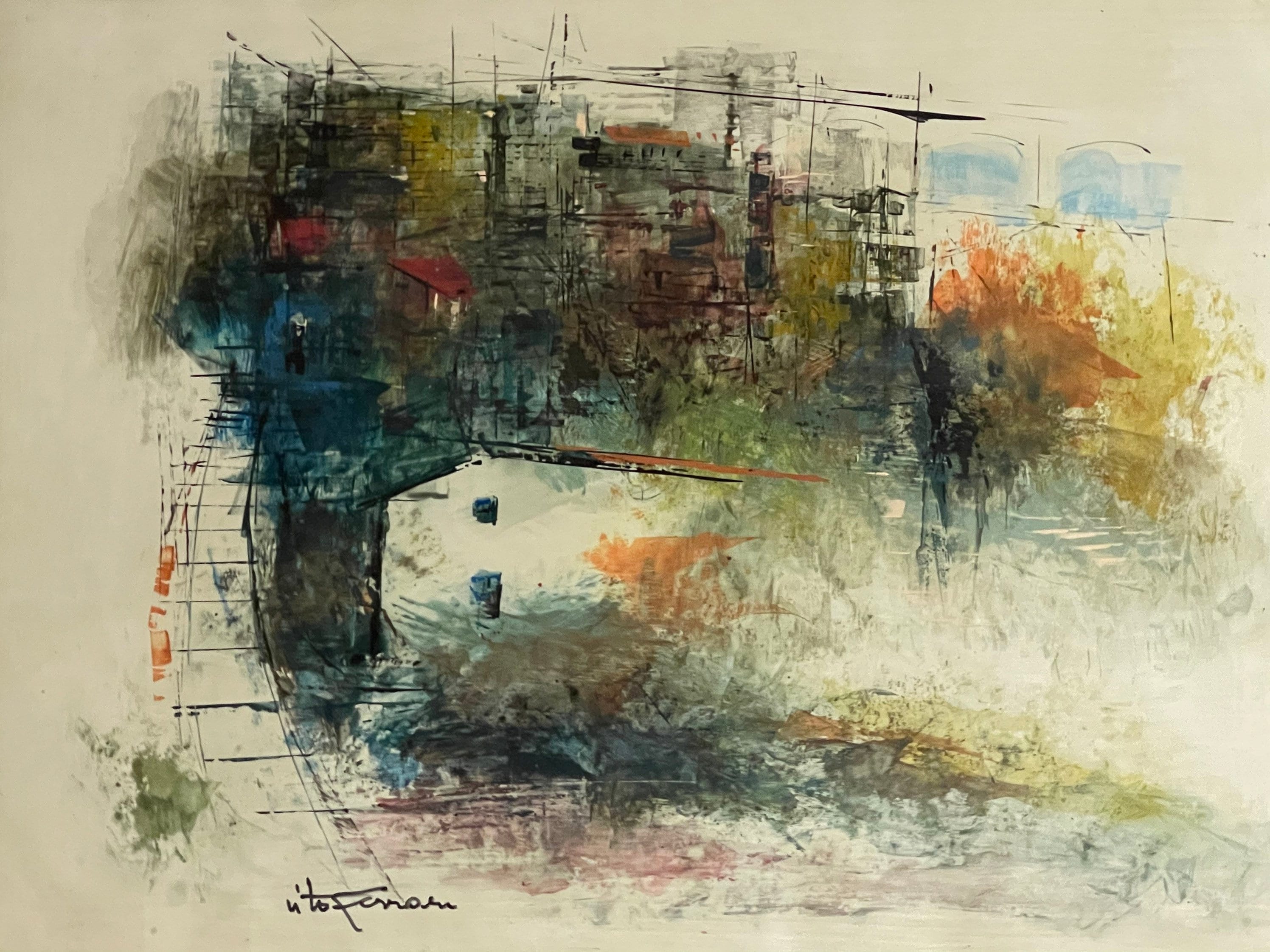 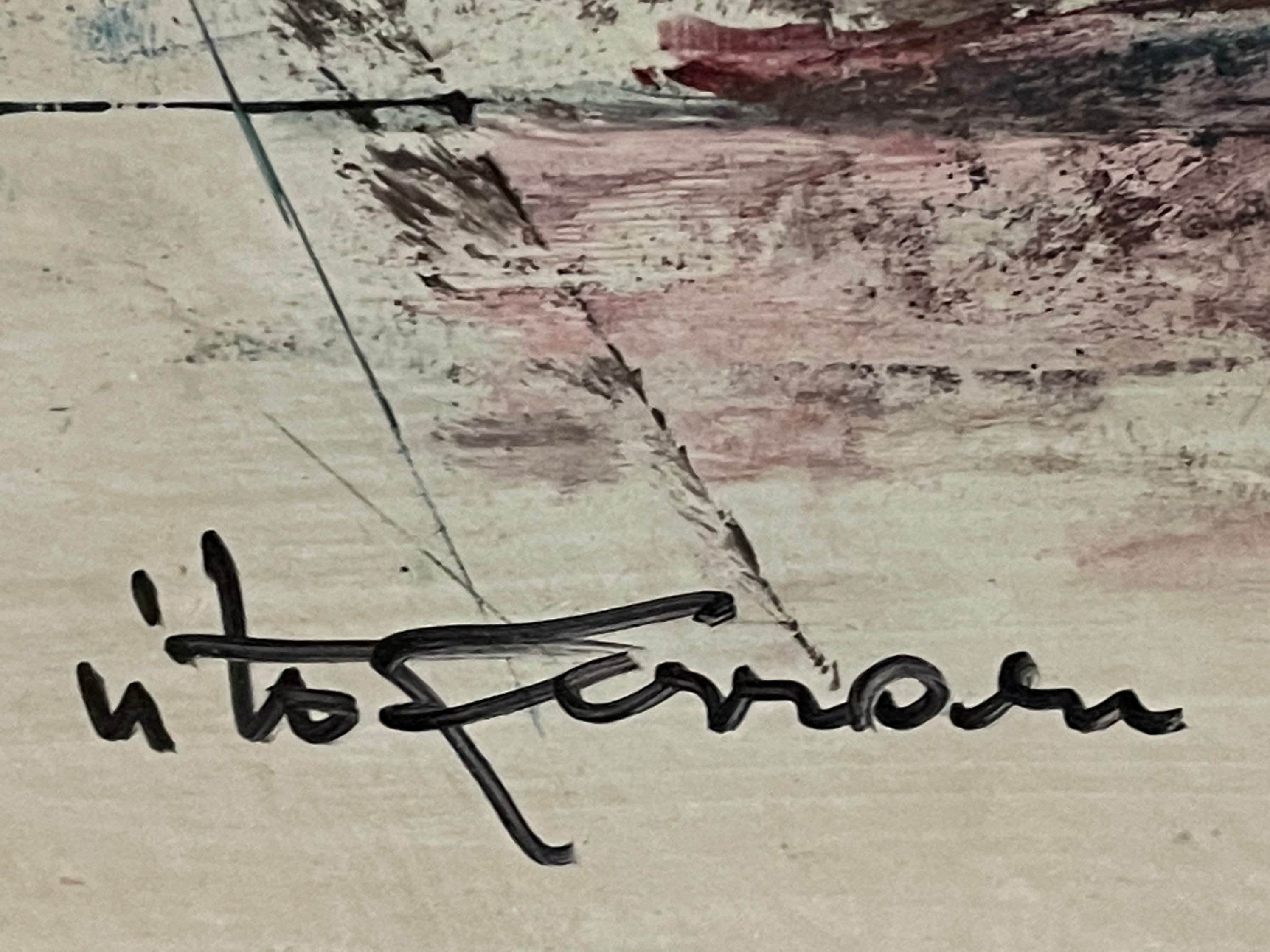 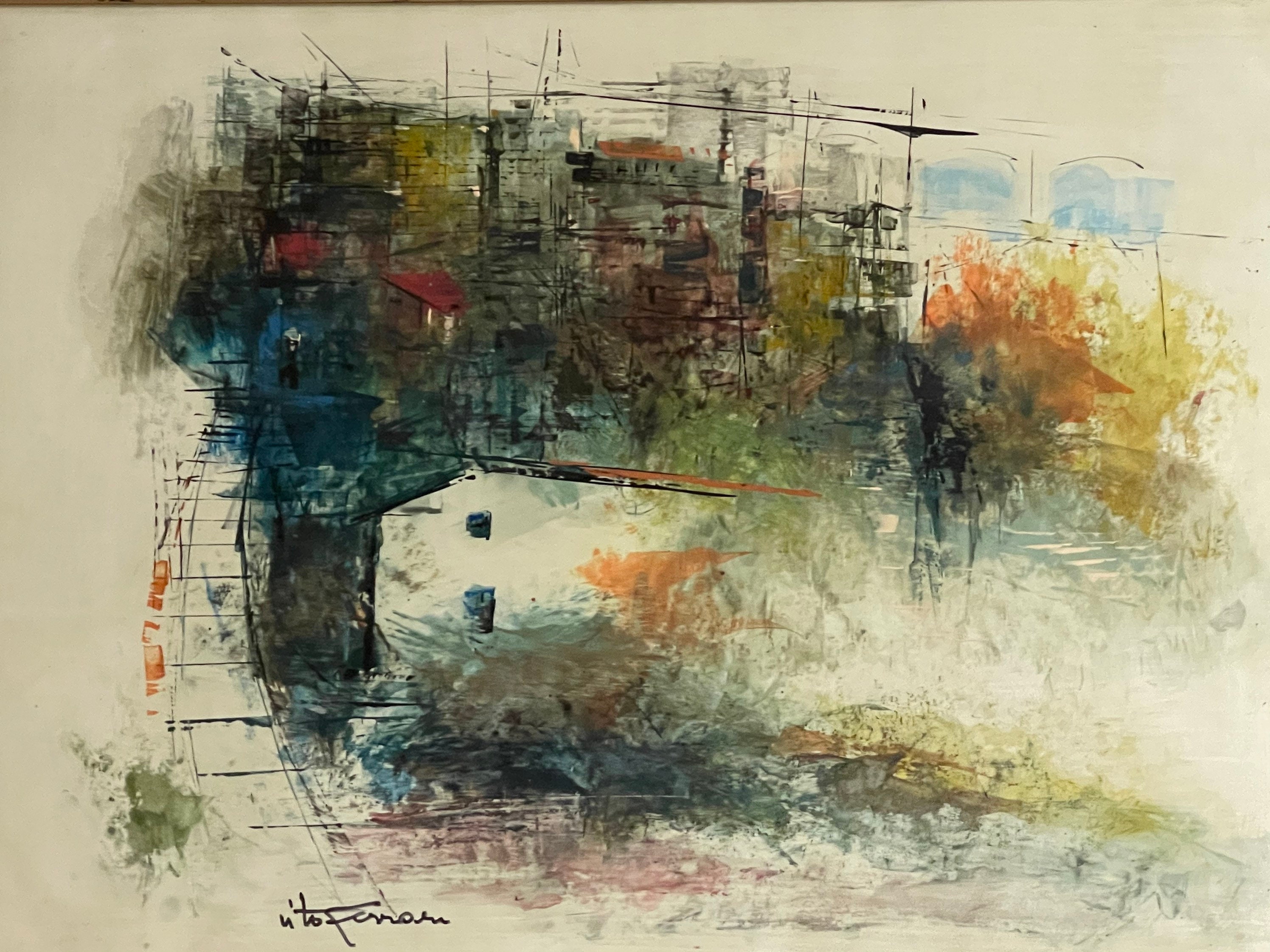 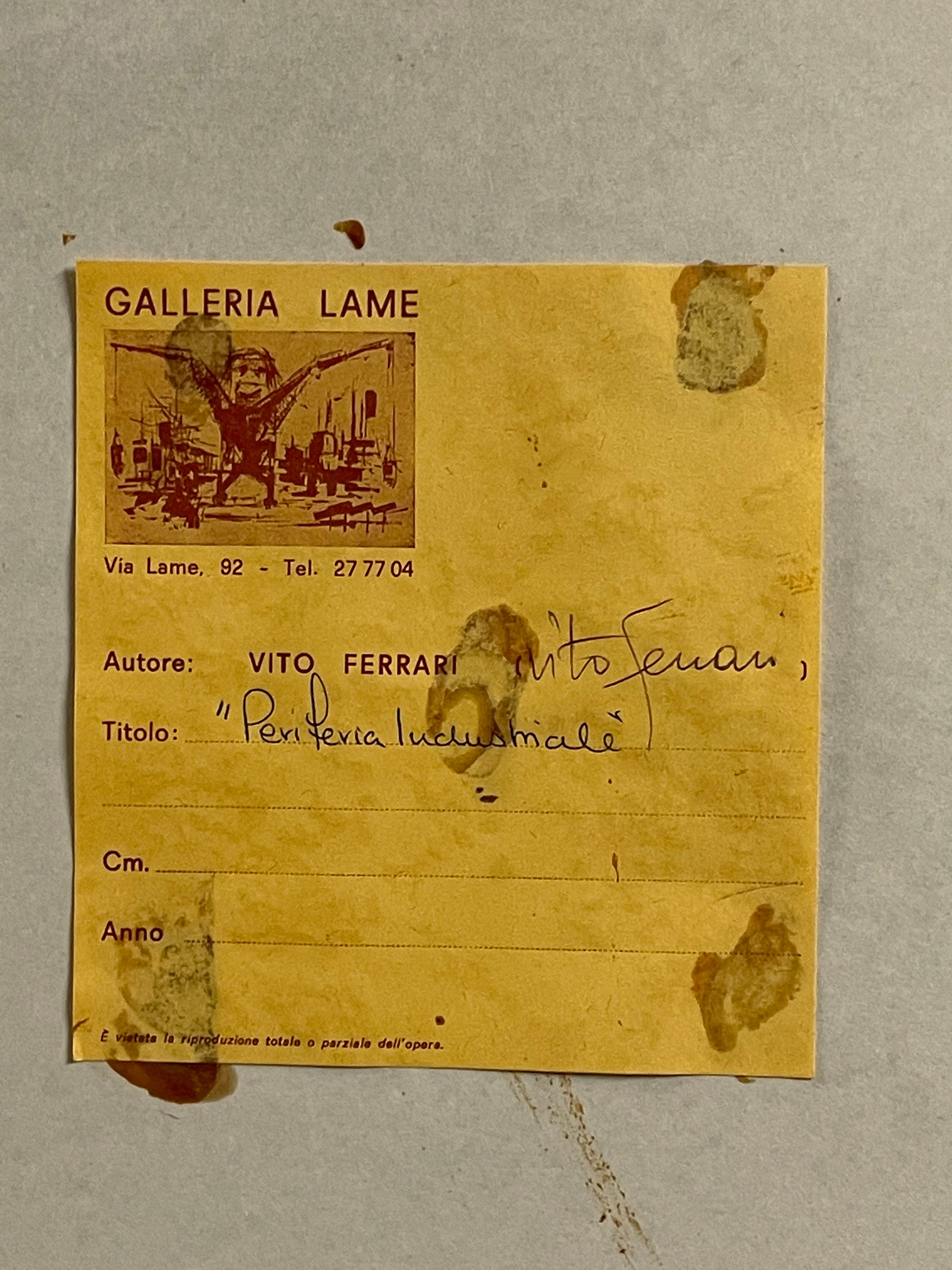 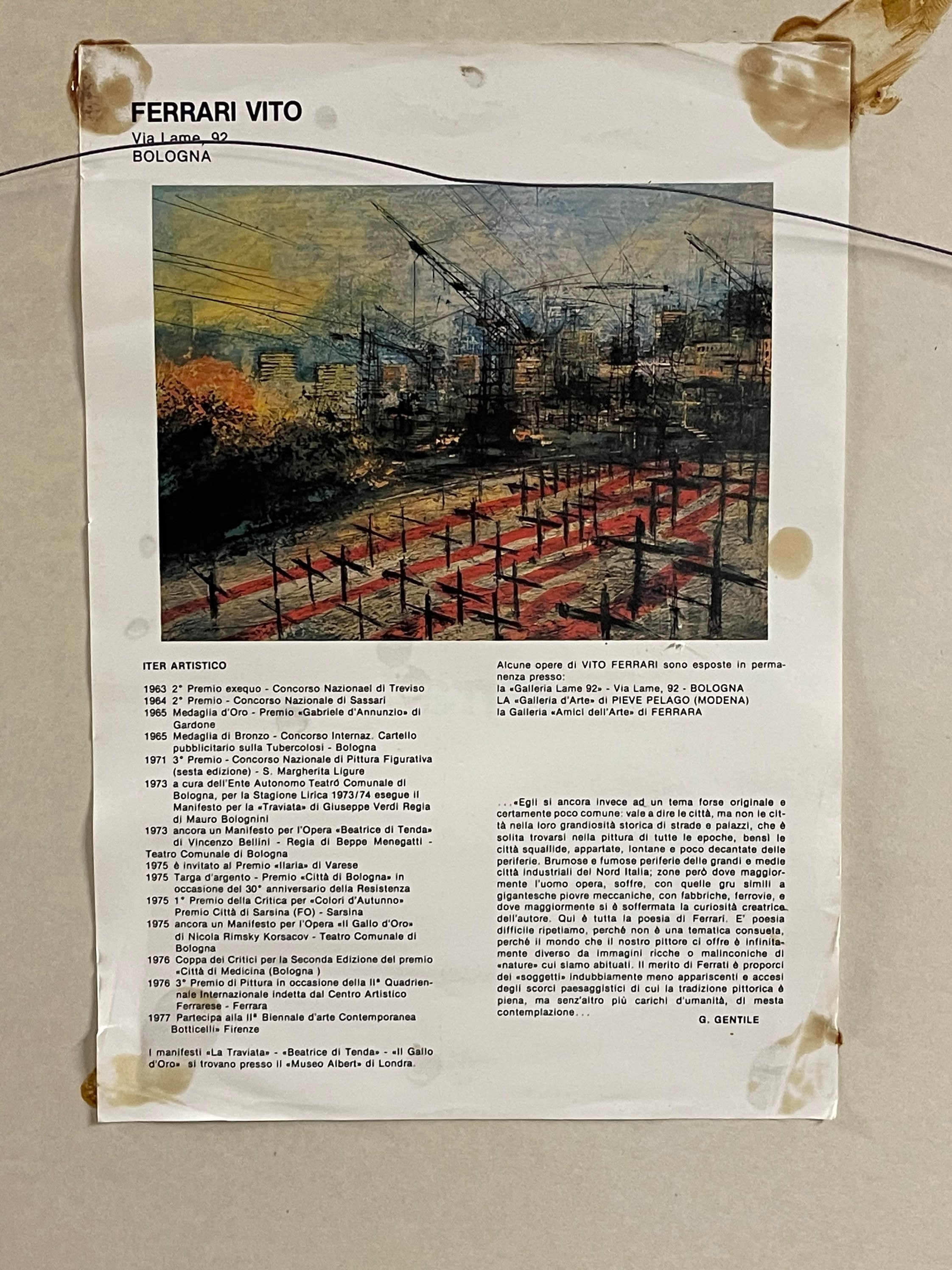 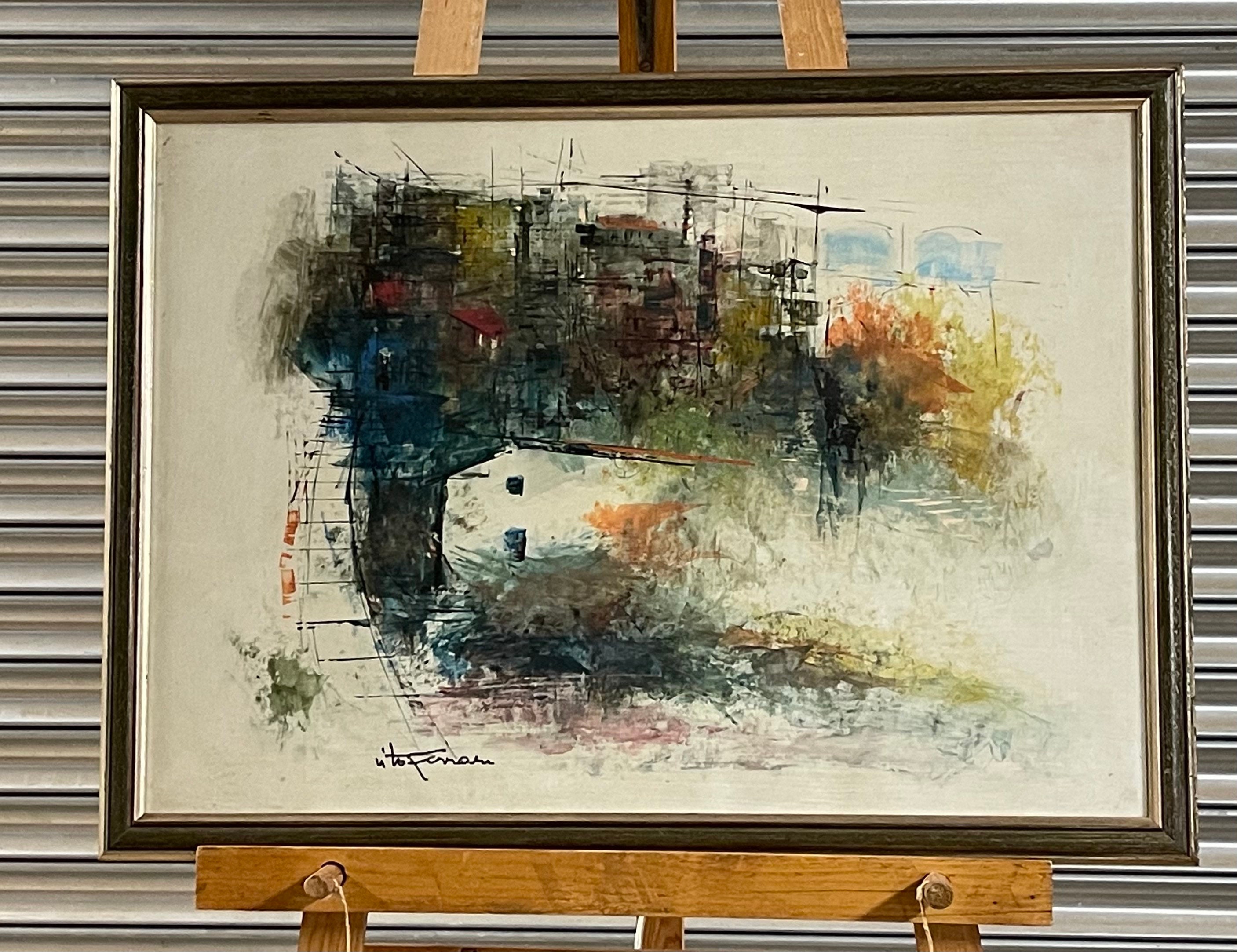 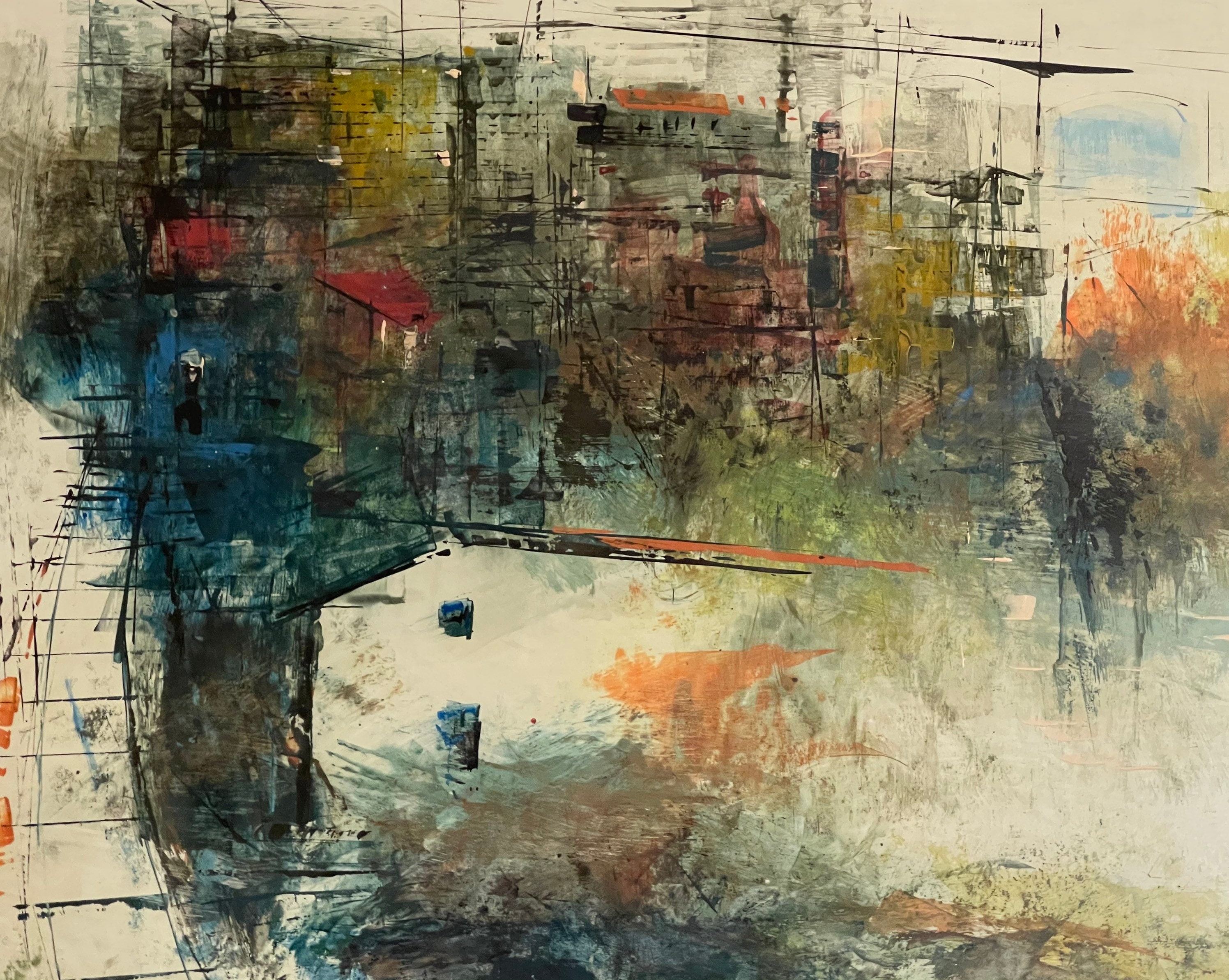 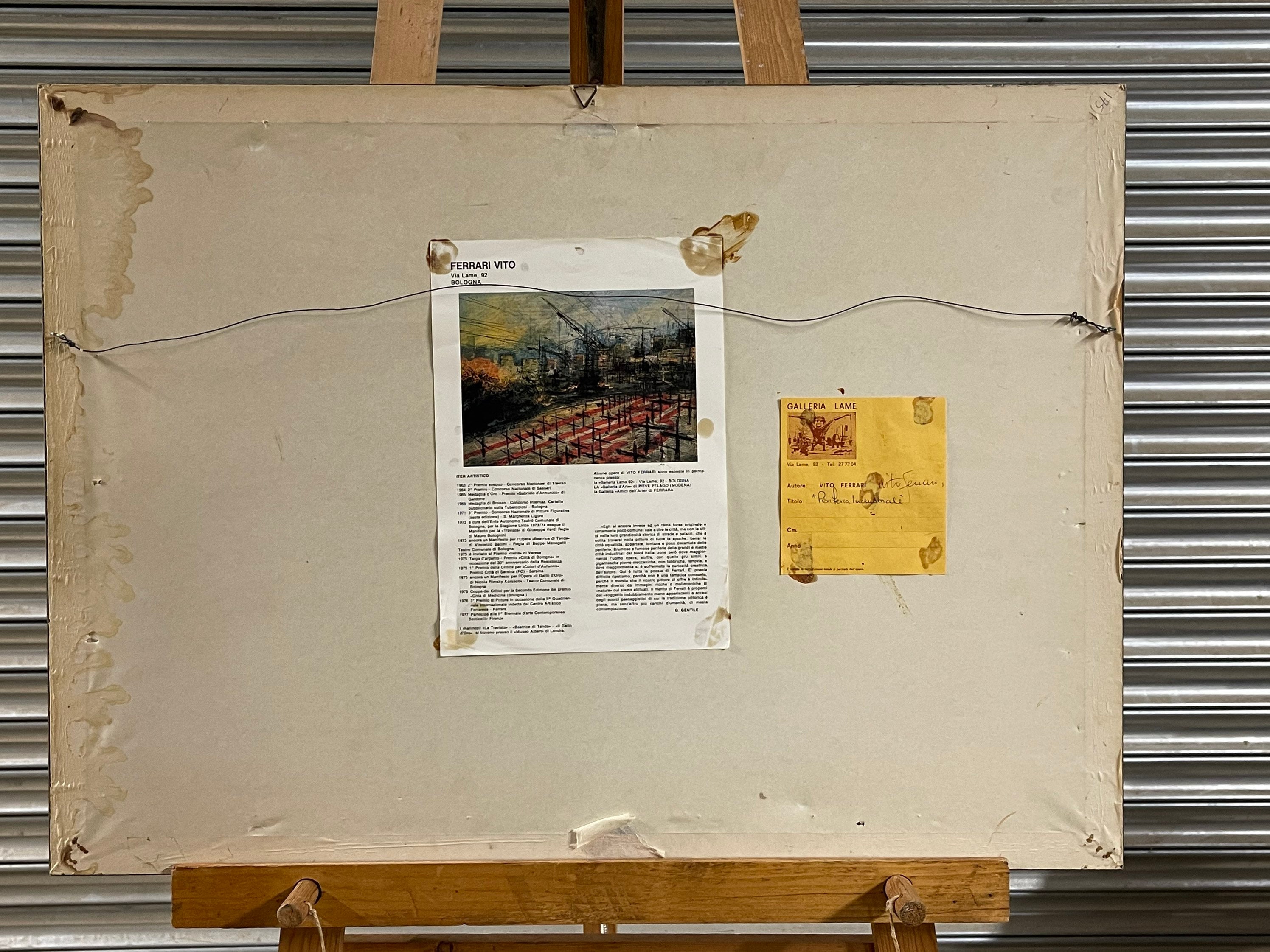 
VITO FERRARI lives and works in BOLOGNA in via Lame 92. After having attended the Nude School at the ACADEMY OF FINE ARTS OF BOLOGNA, the artist has carried out a very intense graphic and pictorial activity by participating in numerous collective and group exhibitions in Italy and abroad. Among the latter, those held in BERLIN should be mentioned (NEBEAN GALERIE, 1970); NEW YORK (INTERNATIONAL GALLERY, 1971); BARCELONA (SIRA GALERIA, 1970); WASHINGTON (INTERNATIONAL ART EXPO, 1983). In BOLOGNA he was awarded for the TBC advertising billboard in 1965. In the same year, in GARDONE, he was awarded the gold medal of the “GABRIELE D’ANNUNZIO” prize. In 1971, in SANTA MARGHERITA LIGURE, he was awarded at the national graphics competition. In 1975, in FORLÌ, he was awarded the first critics’ prize on the occasion of the exhibition “città di sarsina”. In 1982, in BOLOGNA he won the DUE TORRI D’ORO prize. On the thirtieth anniversary of the Resistance he was awarded the “CITTÀ DI BOLOGNA” prize. His are the posters for the TRAVIATA by Giuseppe Verdi, BEATRICE DI TENDA by Vincenzo Bellini, IL GALLO D’ORO by Rimsky Korsakov, three shows staged at the Municipal Theater of BOLOGNA. These posters were exhibited and then kept at the ALBERT MUSEUM in LONDON. He has illustrated numerous books of poetry and literature. Vito Ferrari is also present with an important work in the famous collection of Stratis-Elephteriades Tèriade, in Petra where there are works by Matisse, Giacometti, Chagall, Mirò and Picasso. There are numerous art critics who have presented or reviewed his works. Among the many we remember Corrado Corazza, Alessandro Stefani, Ilario Rossi, Vittoria Corti, Alessandro Mozzambani, Alberto Bragaglia, Lino Cavallari, Silvana Weiller, Alebramo Lebry, Roberto Pasini, Aldo Angelini, Pier Jouver, Giorgio Ruggeri, Franco Solmi, Eugenio Riccomini.